Over the years, we have seen many multi-sport athletes. It’s not rare these days, because sports is such a big part of this world. However, this story is unique and one I will continue to follow and hope you do as well. Not only is this kid fun to interview, but he’s fun to watch on ESPN. In High School, John Brown was a starting quarterback, trying to pursue a dream of playing at the University of Florida for the Gators. The direction of his athletic career took a three point turn, as one day he was discovered playing basketball, something he had never done competitively to that point in his life. He was a 6’2 sophomore JV quarterback who transformed into a 6’6 junior basketball player, being scouted to play college hoops. 5 years later, NBA scouts are keeping a close eye on the high flying forward at High Point University.

-What is it like seeing yourself on Sports Center top ten plays?

It’s very overwhelming to me! Where I come from not too many people can say they’ve made multiple appearances on Sports center. I grew up watching it just like any other kid and to actually see myself on it is truly a blessing.

-Do you think being a starting quarterback has helped your leadership skills on a basketball court?

Of course! Being a quarterback helped me with understanding the strengths and weaknesses of my teammates. So, coming into basketball was a fairly good transition because I had it in my mind that I could lead by example in helping each player develop.

-You went from being 6’2 to 6’6 from sophomore to junior year of high school. What’s your secret for all of us trying to grow an inch or two?

To be honest I don’t know where it came from! Everyday I woke up that summer and all of my clothes started becoming smaller and smaller until I had nothing that fit.

-Best football player you’ve ever watched at the University of Florida?

Tim Tebow BABY!!!! He was a true definition of a leader in my eyes. The way he motivated each player and gave them confidence they never had helped them win a championship.

-Have you noticed NBA scouts at your games? Does it change your mentality?

I never looked for them. I try to stay focused on the task at hand.

-If you kept playing football, where would you be right now?

I would be playing for the Jacksonville Jaguars right now. They need me man, I believe I would be a true asset to the organization.

-If you could create your own dunk, what would be the name of it?

I would call it the “Show Stopper.” After I do it, the game would be shut down and we just get the win. Everybody go home!!!! 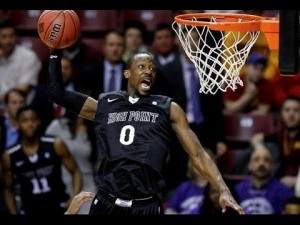 -When you had to sit out your first year at High Point, what kind of drills did you do to concentrate on becoming a better dribbler?

I did a lot of two ball dribbling drills so I could focus on my weak hand and strong hand at the same time. Makes the process go a little faster.

-If you could pick five NBA players to participate in a slam dunk contest with, who would you choose?